I love the Oscars ceremony, and I adore the Tony Awards, making a fabulous night out of watching all the stars, their elegant gowns, and stellar performances.

In this crazy world of writing and publishing, it’s not often we get recognized, or for me, it’s pretty much never. But this month, within two days, actually, I won two very special writing awards. 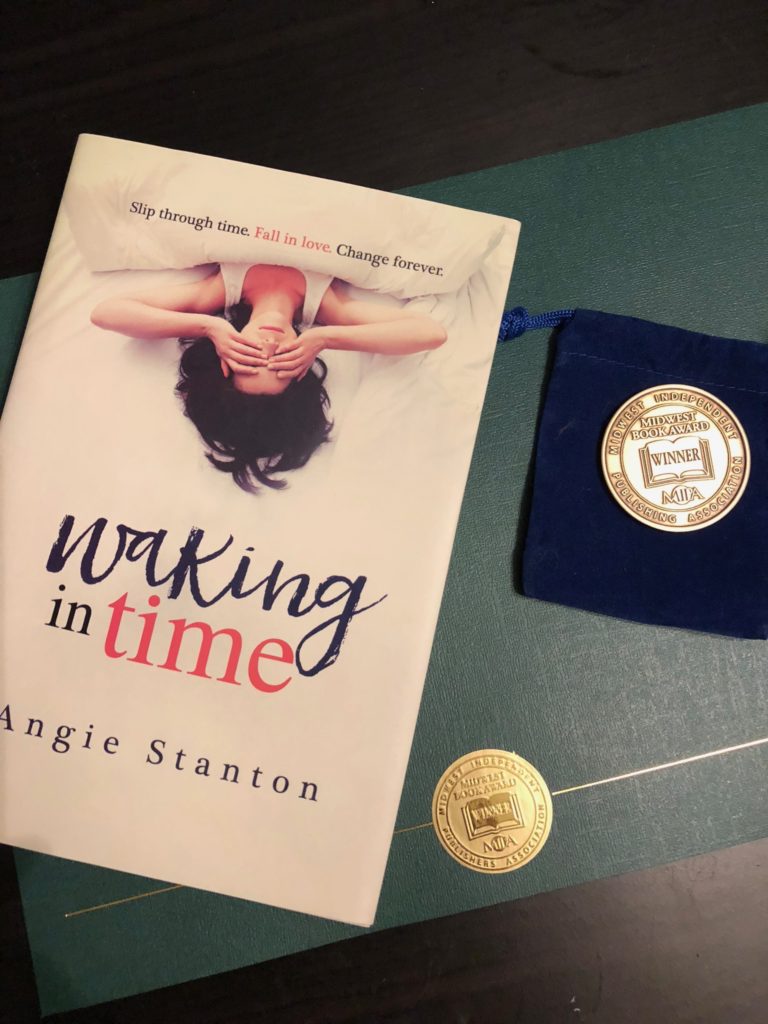 Waking in Time, which is kind of a Veronica Mars meets Time Travelers Wife story, won a Midwest Book Award! A true honor. I even attended the awards ceremony where there was lots of yummy food and complimentary wine!

While waiting nervously for the ceremony to begin, I was checking my emails and received a notification that Waking in Time is also a finalist in the National Readers’ Choice Awards! I didn’t see that one coming!

During the ceremony when they called my name, well, it was my Tony moment! I wasn’t wearing a fancy gown. Gee, maybe I should have glammed up. But I did walk proudly to the dais while in a state of disbelief that I won! It was a wonderful validation for a person who spends most of her time in solitary working quietly at home.

You see, the thing that makes all this so spectacular is because most writers will admit that self doubt is an enormous part of our industry. Other than reviews, which are few and far between, and the rare fan email, we don’t receive much positive feedback. So yeah, I’m going to celebrate this news until reality busts back in and I’m cleaning up dog vomit. (Oh, that already happened.)

Two days after I returned from the Midwest Book Awards, I received another lovely email that my book, If Ever, won FIRST PLACE in the Write Touch Readers’ Award contest!

I’ve followed this award for years and thought it impossible to win. Who knew! Aaaand, within an hour. Yes, one hour, I learned it is also a finalist in the National Readers’ Choice Awards. Crazy, right? And then there’s the Holt Medallion Award that If Ever is also a finalist. I knew it was a great book!

Only time will tell if these other finals result in wins, but I am a very happy girl, because you know what all this means? My writing doesn’t suck!

I recently had the treat of chatting with a delightful husband-wife team that performs with the Broadway Tour of An American in Paris. Now I can’t wait to see them in the show! 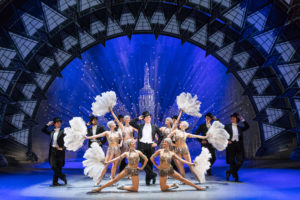 What could be more romantic than a trip to Paris with the love of your life? Perhaps it’s transporting an audience to Paris eight times a week, while touring the country. That is what married couple Kirsten and Matthew Scott are doing in the national tour of AN AMERICAN IN PARIS, which dances into Madison on February 28th.

Kirsten (Milo Davenport) and Matthew (Adam Hochberg) are a married couple on a real life adventure. After living in Midtown Manhattan and working on Broadway for the past ten years–most notably Kirsten in Big Fish, and Matthew in Jersey Boys, they made a life changing decision. Through hard work, talent, and a bit of serendipity, the couple was cast in their first national tour. They let go of their apartment and packed their belongings into storage so they could embark on this adventure of traveling the country while living the dream of performing.

Kirsten says, “We get to see a little slice of different parts of the country. There are times when I look at Matt and think we’re on vacation and forget this is a job.”

While they’ve marveled at the magnificent Kennedy Center Opera house, the history and food of New Orleans, and the unexpected charm of Albuquerque, most of their tour stops leave little time for sightseeing beyond exploring the local gyms, yoga studios, and coffee shops.

“Downtime is at a premium,” Matthew explains. “Most people don’t realize that we perform Tuesday through Sunday, and on Monday, which would be our day off in New York, becomes a travel day. Monday is the day we get up early and take two flights or a bus, arriving at a hotel at four or five in the afternoon and unpack. There may be a time to grab dinner, or see a little bit.”

Each night they report to one beautiful theatre after another to perform in the Tony Award winning musical. AN AMERICAN IN PARIS begins at the close of World War II in Paris. Inspired by the Academy-Award winning film, AN AMERICAN IN PARIS is the romantic story about an American soldier, a mysterious French girl and an indomitable European city, each yearning for a new beginning in the aftermath of war

The dance heavy show features three large ballet numbers, directed and choreographed by 2015 Tony Award-winner Christopher Wheeldon. “AN AMERICAN IN PARIS harkens back to the old school musical like Oklahoma,” Kirsten explains. “That show was the first to take a departure from the theatrical singing and acting and blend in a dream ballet that supports the plot.”

While the husband-wife team only share a couple of moments on stage, they do sing a duet together, albeit separate as they are singing about other people in other worlds.

A special moment each night for Kirsten, is when the main character Lise sings “The Man I Love.” Kirsten recalls fondly how the song brought her and Matthew together in college when they would meet at his apartment and he would help her break down the lyrically beautiful, yet difficult song. “I never felt that connected to a song before.”

When asked what their plans are when the couple steps out of AN AMERICAN IN PARIS in July, they are waiting to see where the wind blows them. Matthew says, “We realize how lucky we are on this glorious vacation.”

If your love of Broadway and musical theatre matches mine, please check out my latest novel, IF EVER, a Broadway love story. 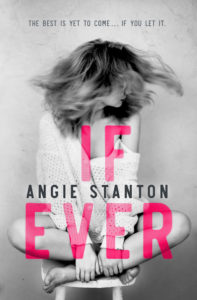 Available from all online outlets. 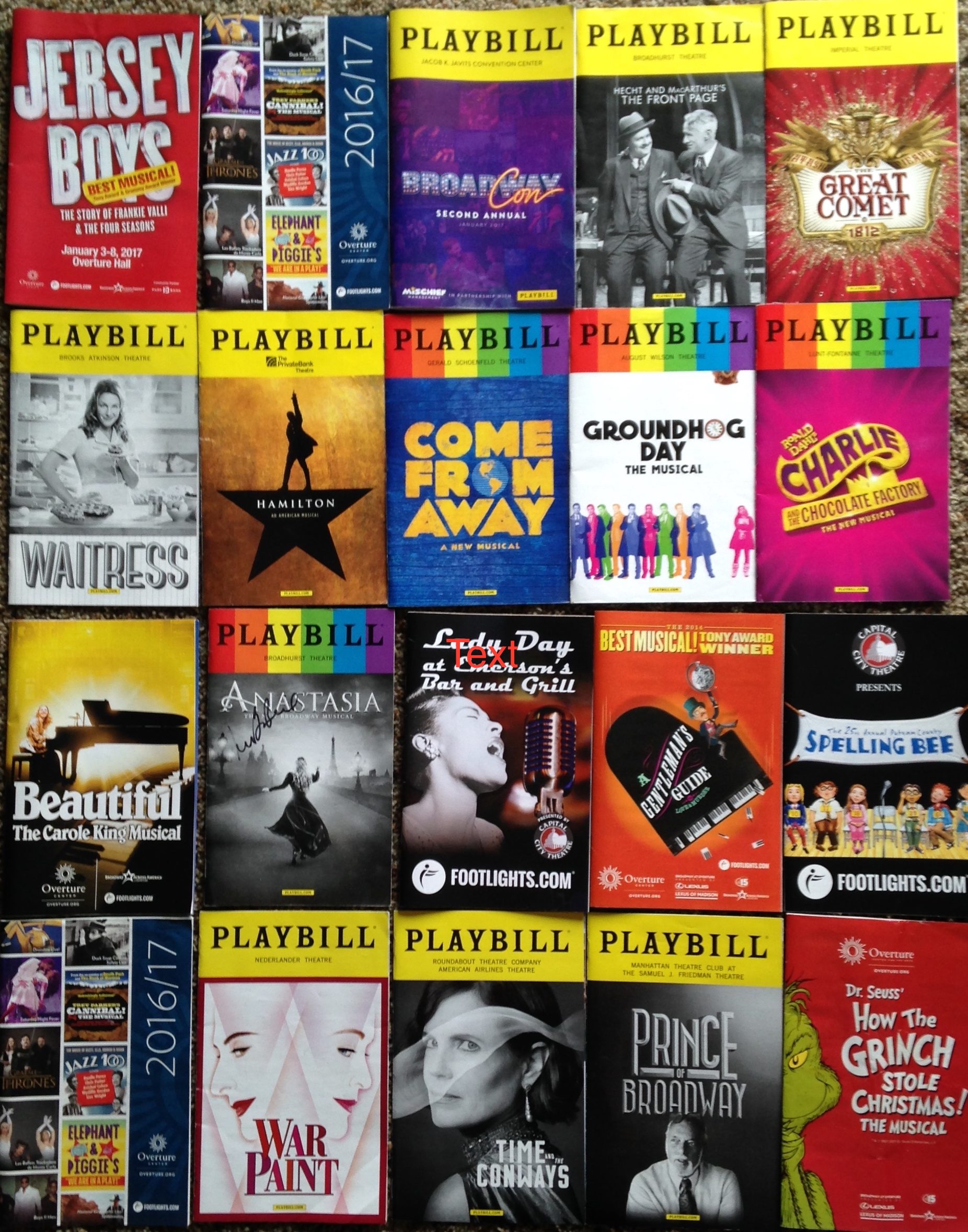 These are the shows I saw last year. It’s a lot. Maybe I should be embarrassed by the volume, but I’m not. I write for BroadwayWorld.com, so I’m able to see the national touring shows when they roll into Madison. Tickets for Broadway, well, I’ve plenty tricks up my sleeve to find a deal, which I’ll share another time. In fact, I love Broadway so much, I wrote a book, IF EVER, where the hero is a Broadway Actor.

Last night I saw the 20th Anniversary Tour of RENT. I immediately fell in love with the performers and their stellar vocals. There is nothing on this planet like a Broadway voice.

Sitting in the darkened theatre took me back to my first time seeing RENT at the Nederlander Theatre on Broadway with my daughter and some friends. The director of a local theatre group knew an actor in the ensemble and was able to snag us a backstage visit. Imagine taking two musical theatre-loving teenagers to RENT and then knocking on the stage door for a private backstage tour!

Our guide for the night was Telly Leung, a young actor with great ambitions. It turns out I’d already seen Telly in Chicago playing Boq in Wicked. He couldn’t have been kinder as he walked us onto the RENT stage and told us stories of joining the cast. We pestered him with questions about his dreams and goals. I recall him saying he hoped to stay with the show for five years and to play the role of Angel. I couldn’t imagine doing a show for that long, but his passion was inspiring.

I was happy to hear that Telly did eventually land the role of Angel. However about a year later, I learned that RENT was closing on Broadway, and I was disappointed for the young actor not quite reaching his goals. Little did I know, he was just getting started.

A few years later I was in New York on business and catching a couple of shows including GODSPELL. To my surprise, I recognized Telly Leung in the cast. He was amazing and his vocals were phenomenal. The rest of the cast wasn’t shabby either. It included Hunter Parrish from Weeds fame, 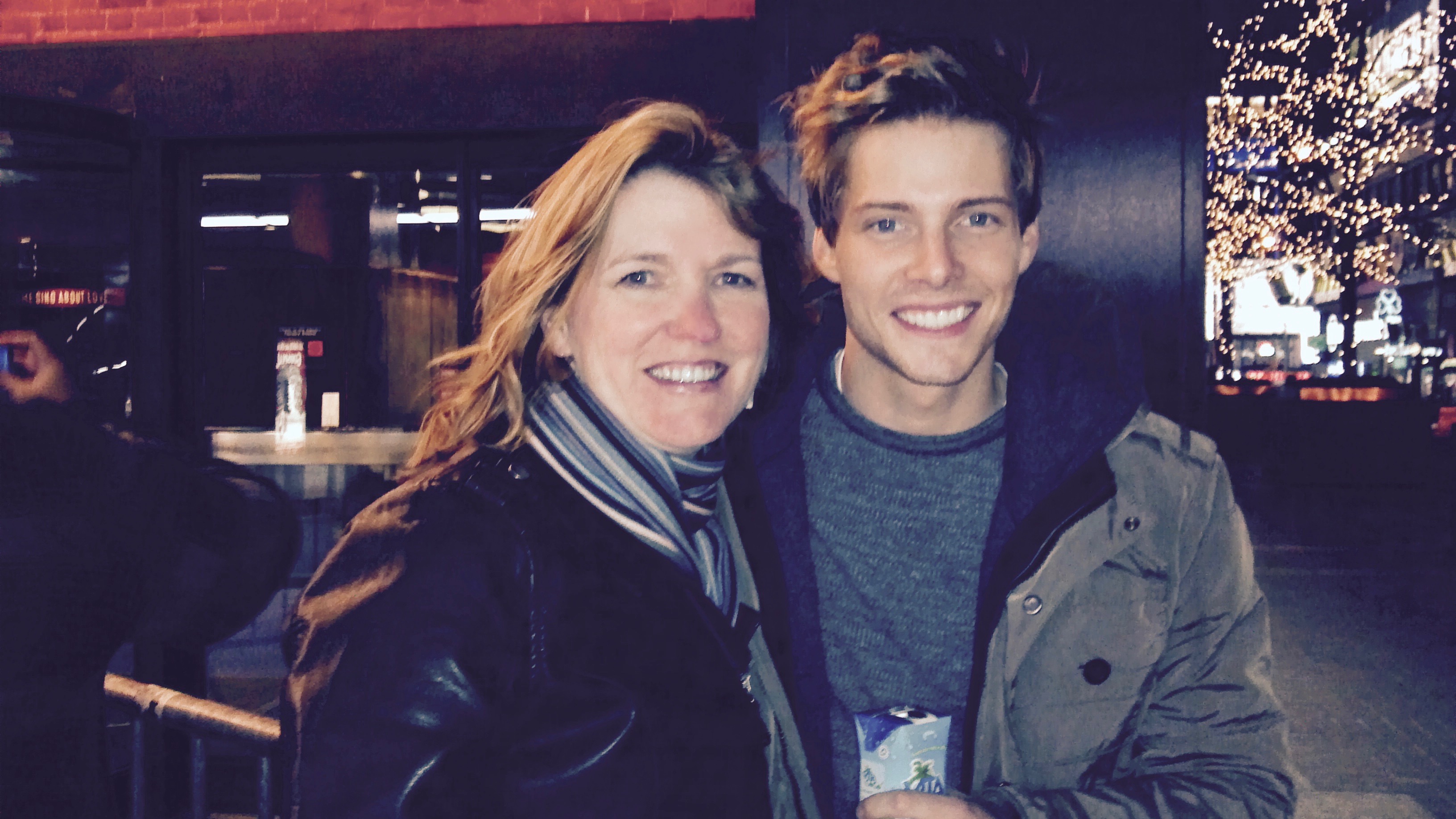 Uzo Aduba before she hit it big in Orange is the New Black, and Lindsay Mendez who is quite theBroadway star in her own right. I saw the show twice! 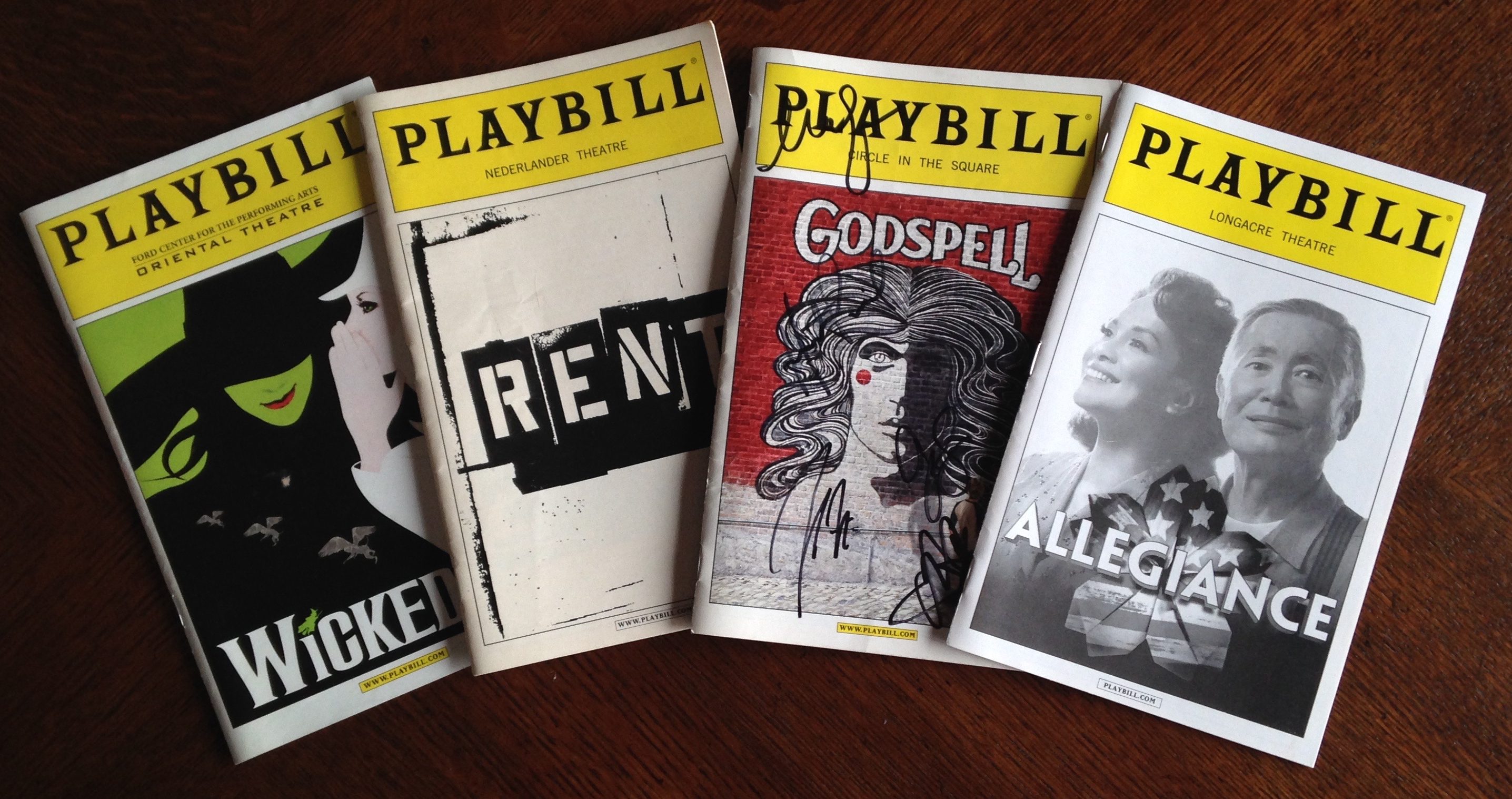 My collection of Telly Leung playbills.

Over the years I spotted Telly on Glee and saw him in Madison doing a fundraiser for Capital City Theatre. Not long after that I heard he was back on Broadway starring in Allegiance alongside the legendary George Takai, from the original Star Trek, and Lea Salonga, who hit it big with Miss Saigon and Les Miserables. Of course, I saw Allegiance on my next visit.

I love how theatre overlaps and I’ve been introduced to so many actors whose careers intersect and I can follow as they go on to television, movies, and ideally more Broadway. 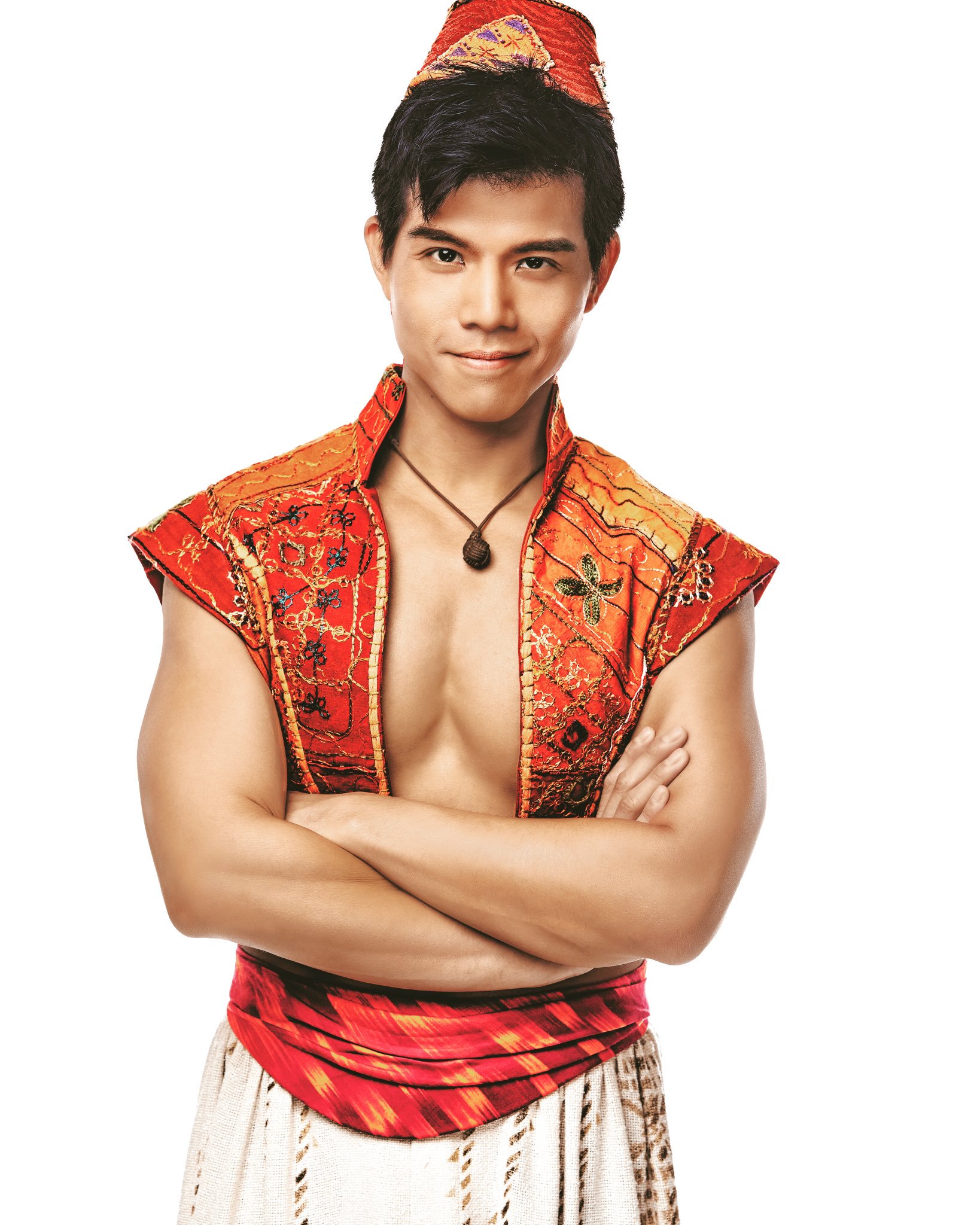 So to Telly Leung, who currently stars on Broadway in the title role of Aladdin in Aladdin, congratulations on a fruitful career! You’ve come a long way since I met that kid with big dreams, and, yes, I’ll try to get to New York soon to see the show!

Telly Leung has a several other Broadway shows and tours on his resume as well.

Stay tuned for more of Angie’s stories of her experiences with Broadway, New York City, and the adventures that follow. Check out her latest book, IF EVER, which blends her love of reality dancing shows and Broadway.

Broadway and Pushing my Boundaries in Big Scary NYC

Looking Back on my First Visit to Broadway 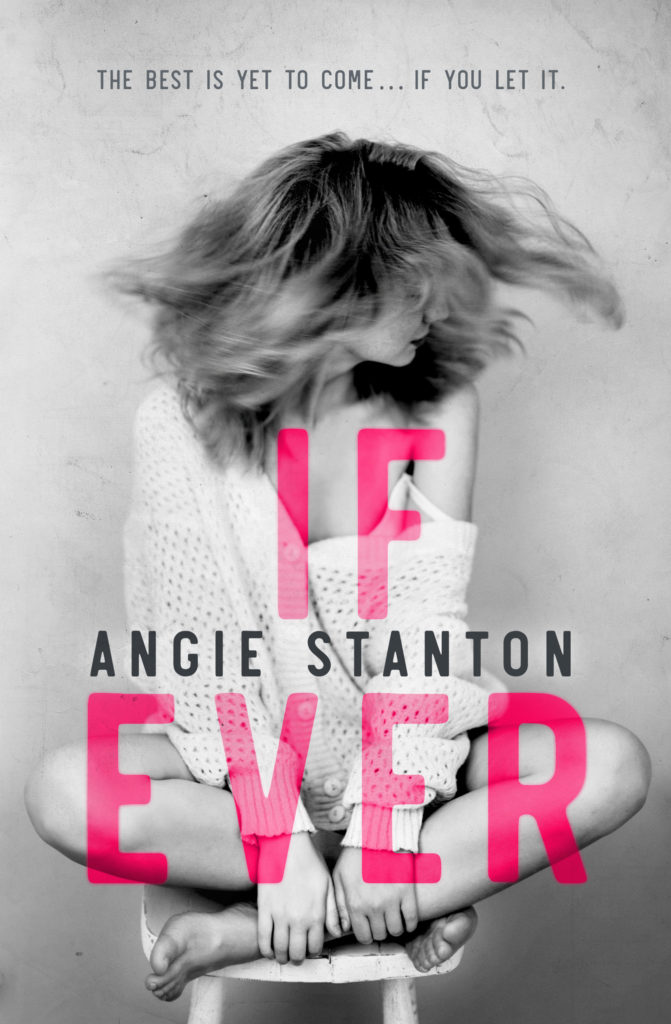