Friday arrived along with one of my best friends and a whirlwind weekend. I left my rent a room and moved to my priceline.com four star hotel. Ah, what luxury in the form of a teeny, tiny room. We ditched out digs and had a leisurely lunch at the Brandt Park Cafe, a gorgeous outdoor restaurant I’ve always wanted to try. 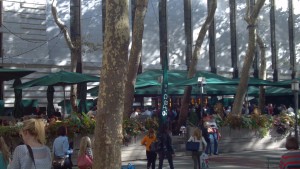 Afterward we when looking for a washroom, we used the public washroom in the park. Check it out. It’s this ancient old building. Inside was this huge bouquet of fresh flowers. Only in New York. 🙂 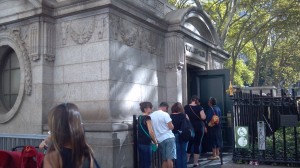 Later we went to the TKTS line for show tickets and instead of the two hour wait of the day before, we were through in twenty minutes! And scored tickets to Big Fish. It’s a show that hasn’t even opened yet, which confuses me. How can a show not be open and yet sell tickets and put on a show? The show was fun, lots of fun production stuff, but pretty mellow. 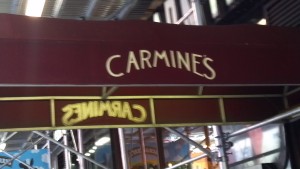 The next day we lunched at Carmine’s, an Italian restaurant that serves huge platters of food to share. We loved the chicken marsala.

After that we took the subway to the World Trade Center Memorial site. It was enormous, beautiful and a very moving site to see. 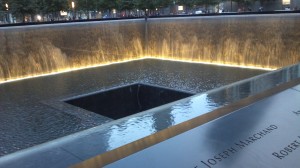 For dinner we took the subway again (and I was getting pretty good at it, but I did keep a watch out for rats). We went to Little Italy. O.M.G. Is Little Italy ever awesome! I had no idea. It was all street booths and outdoor restaurants. Colored lights were strung across the street setting a gorgeous atmosphere for the huge throngs of people. The subway back to our hotel was packed tight with people and had a real party atmosphere. See, I finally got the hang of the subway. 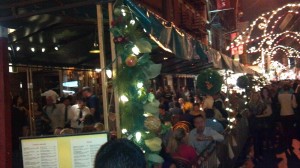 The next day, my last, we walked many dozen blocks up to and through Central Park.

By this time I’ve realized that New York has every kind of person. Every ethnicity, age, and income level who live and work in New York as well as tourists from around the globe. And everyone was tossed together like a colorful, perfect salad.