When I planned this trip, I thought I’d find a great deal on a hotel through Priceline.com, but nope. I picked one of the busiest weeks in NYC. Apparently there some huge U.N. thing going on. So, in my first act of pushing my edges and living outside my comfort zone, I booked a room in someone’s apartment. Yup. Sounds crazy. I agree. But a crazy friend of mine suggested it, (ahem, Killian McRae) and I checked it out.

So after waking at 4 am I landed on the doorstep of a lovely young Russian woman. At least I think she’s Russian, based on the books on her bookshelf that I can’t begin to decipher. She has a gorgeous apartment in midtown and the view from the rooftop is spectacular! 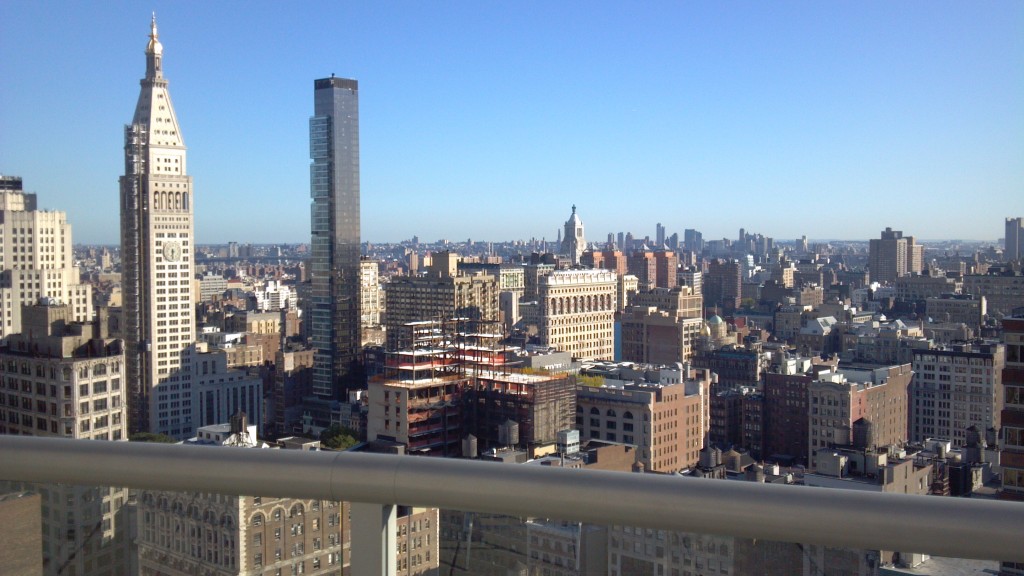 After debating whether to walk or cab to my lunch meeting with my agent, I opted for the ease of a cab. Heck, I was wearing a dress with a spanxy kind of slip underneath and a pair of low heels. Both these items are foreign to me. My normal attire consists of faded brown capri pants and whatever t-shirt my hands land on first. Anyway, my agent, Jane Dystel, was fabulous as were her colleagues who joined us. I truly believe I hit the jackpot with Jane and her team.

When our lunch was over, I snuck over to Union Square where an outdoor farmers’ market was going on and slipped  sport sandals out of my over-sized handbag. It didn’t look classy, but I could walk comfortably. Except that my spanxy slip kept riding up my legs and threatened to hike up my hips. I was continually scooching it down on my mile plus walk back to my rented room at the apartment.

After a well deserved nap and a short wait in the TKTS line, I scored a ticket to Pippin! When I watched the Tony’s I was mesmerized by the lead guy’s voice. OMG! Seriously, this guy has stage presence and a voice that melts, well, anything. The show was amazing, unique and different than anything I’d seen. It’s definitely in the “I recommend it” file.

Now the big dilema. It’s 11:00 pm in New York City and I’m on 45th Street. I need to get to 28th Street. I’m feeling kind of cheap after two cab rides in one day already. So I ask three of New  York’s finest if I’m safe to face the terror of the big city subway. While they wouldn’t guarantee  that I’d live, they assured me it was generally as safe as crossing a city street. Again. I’m in New York City! Hello! People! Let me catch you up.

My first half dozen experiences in NYC while wonderful, happened long ago when the city wasn’t like walking into Disney land. While my friends and I never had a mishap, I saw more than my share of drug dealers, pimps, homeless people, and prostitutes. That was a very long time ago, but I have been scarred for life.

Well, tonight I took those cops advice and decided to follow the crowds to the subway station and push the edges of my comfort zone. Boy did I ever. I already had my Metro card and I didn’t embarrass myself sliding it through the slot. I smoothly entered the subway car and sat down only to look up and realize that I was on a line that didn’t stop at 28th street, my stop. Oh shit!

It’s after 11 pm and I’ll have to walk seven blocks alone in the big scary city by myself! So I get off at the next stop and decide not to panic. I realize that I can wait for the next subway train and  it’ll stop at 28th. Great. There are a couple other women waiting, so I feel sort of safe. Then I look across the track and see a sign taped to the wall about treating for rats in the subway. Ha! Isn’t that funny? You always hear about rats in New York, but thank God they don’t exist. Thank god they treated to get rid of them. 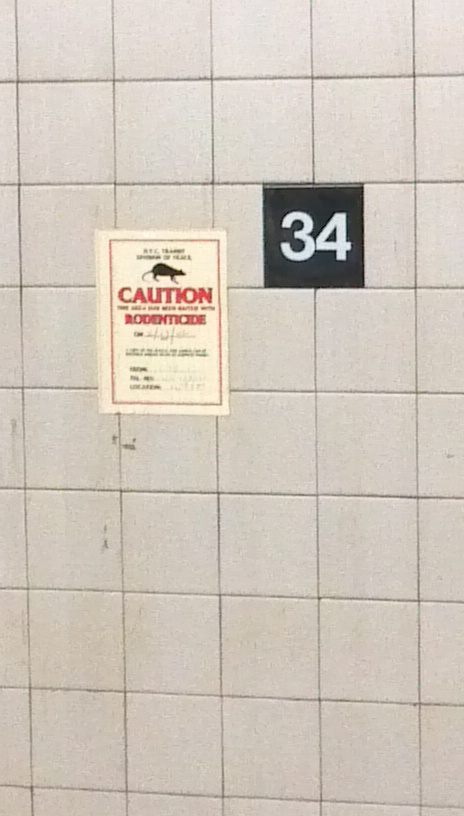 But as I stood waiting that long ten minutes for the next subway train, I glanced down, and A RAT SCURRIED DOWN THE TRACKS!!!!! O.M.G.!!!!! I really did want to run the last seven blocks to my cute little room with the pretty view in some lovely Russian woman’s home. But I didn’t. Because I figured in the subway, they might stay down by the tracks, but up on the street they might run out in front of me. Eek!

Long story short. I lived. No one mugged or killed me. I am safe in my bed listening to the traffic, horns and sirens out my window and hoping I don’t dream of rats.