When you fall in love with a rock star, anything can happen.

One day while watching the Interstate exit for her dad’s long awaited return, Libby’s life is rocked when Peter Jamieson steps off his tour bus and into her life. After a couple chance meetings with Peter, Libby breaks away from her perfect behavior and her life changes course.

Peter longs for normalcy away from the screaming fans who know nothing about the real him. He is amazed to discover Libby has never heard of him or his band. Soon their friendship turns to love. While Peter battles his family’s growing interference so he can spend time with Libby, she struggles with her eccentric aunt who turns more bizarre each day.

Their lives are torn apart when Peter’s family intrudes and Libby disappears. Peter’s desperate search for her comes up empty. Can they find their way back to each other while the world plots against them?

Real locales used in Rock and a Hard Place

Parfrey’s Glen is located in central Wisconsin as part of Devil’s Lake State Park near Baraboo, Wisconsin. I’ve been there a handful of times. It made such a huge impression on me that I had to use it in a book. It is not located right next to the interstate as portrayed in Rock and a Hard Place but tucked away off a county road.

Red Rock’s Amphitheater is located outside of Denver, Colorado. I’ve visited there twice, but only as a tourist and not during an actual concert. I’d love to see Jamieson play a concert there. Libby loves Red Rocks. 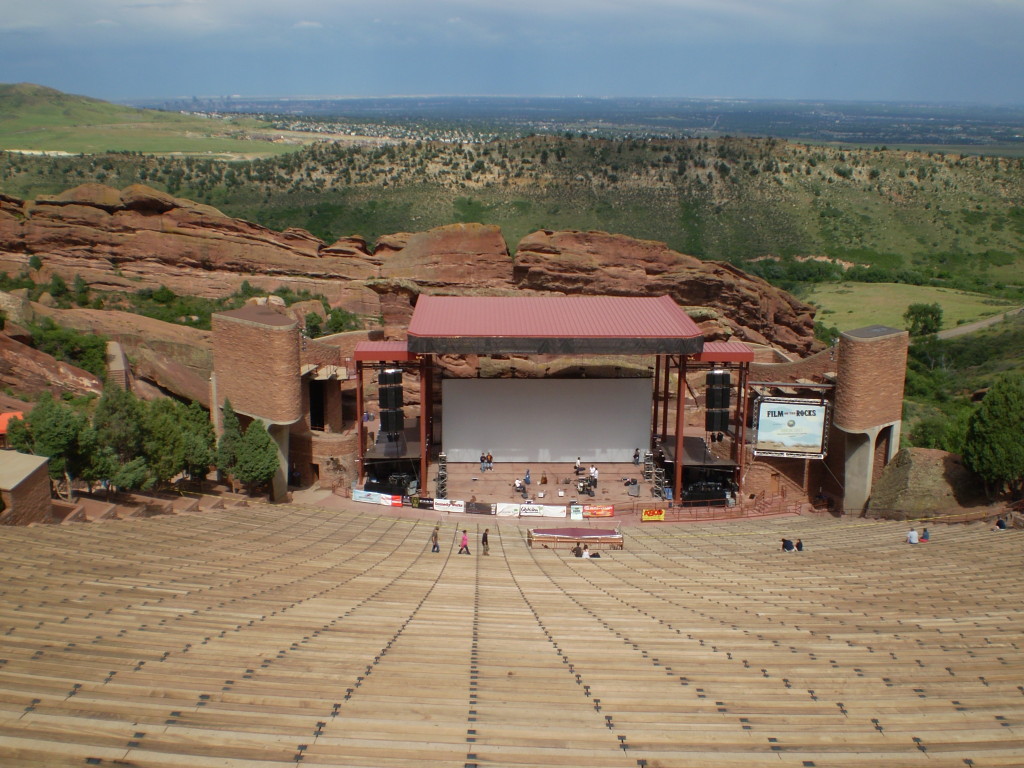 Excerpt from Rock and a Hard Place

The instant the tour bus door opened, Peter flew out ignoring the steady rain that soaked the area. His footsteps sank into the soggy grass as he ran across the clearing and past the large oak where he had first met Libby. He made his way down the muddy path leading him closer to the stream. The slick ground slowed his progress. Please let her be here.

The rain came down in a constant stream, muffling sounds in the glen. Peter rounded a bend and spotted Libby. He paused and smiled. She grinned back.  Then he laughed. She stood in the center of the large rock that hung over the stream. She wore a dark green windbreaker and jeans. One hand was tucked into her coat pocket the other held a huge blue and white faded umbrella. Its enormity dwarfed her. She looked like a cute little gnome who’d been left out in the rain.

“So are you.” She grinned, her hair damp. Peter noticed several gaping holes in the umbrella, causing a constant flow of water onto her.

“I was so worried you wouldn’t be here, with the rain and all. Have you been waiting long?” He wanted to reach out and hug her, but didn’t quite know how to make it happen.

“No, not long at all.” A shiver racked her body.

“Liar. Your lips are turning blue.” Peter’s eyes settled on her trembling mouth.

“You’re getting soaked, come stand under the umbrella.” She lifted it enough to clear his height. In the process of tipping the umbrella, a sheet of cold water swooshed off the back and splashed their legs as it hit the rock.

“Oops, sorry,” she said with a giggle.

Peter crowded close under the umbrella. He gazed down at her smiling face. Rain drops clung to her eyelashes.

“What do you say we go somewhere we won’t get pummeled by rain?” He took the umbrella from Libby and wrapped his arm around her. She felt small, delicate and very wet. They moved off the rock and climbed to an area near the wall. Trees reached over the glen, blocking some of the rain. The constant downfall now sounded like a pitter patter.

Peter reached for her hand and held the oversized umbrella with his other. “Geez, your hand is freezing.”

“I’m not gonna lie, it was really cold out here, but I didn’t want to stand you up.” Her cheeks were chafed red from the cold. “So I hope you plan on making it worth my while,” she challenged him with a sly look.

“Now that you mention it, I did have something in mind.”

“Want to know what it is?” he teased, watching her reaction. He loved to see her off balance.

“I have something for you.” He had moved heaven and earth to pull this together.

“You do?” Her eyes glittered in surprise.

“Yup. Close your eyes and hold out your hands.” He couldn’t wait to see what she thought. Libby obeyed. Her dark eyelashes lay against her rosy cheeks. His heart beat in anticipation. He reached into his jacket pocket and pulled out a white plastic bag, then glanced up. Her closed eyes changed to little slits.

Libby squeezed her eyes closed and laughed. She held out her hands and waited. Peter pulled the slim item out of the bag and placed it in her hands.

Her excitement touched him. “It seemed like a good idea. You didn’t have a phone number to give me, and I really missed you. It’s gonna get harder to see you. I thought this way we could stay in touch and actually talk whenever we want.”

She closed her hand around the precious phone and turned pensive.

“Is something wrong?” He wondered what could have upset her.

“I don’t know if I should accept this.” She gazed up at him with large doe eyes. He couldn’t believe this. She needed to take the phone.

“We barely know each other, and, well…” Mischief lit her face, and he wondered what she was up to. “We’ve never even kissed.”

Peter paused and took a good look at her. He’d been wondering how to sneak a kiss; she just made it simple.

He tossed the umbrella aside and pulled her close. He let his fingers tangle in her wet hair and lowered his mouth to hers. He kissed her long and slow, taking his sweet time. Cold rain trickled down his neck as he savored each moment. Startled at first, Libby now matched his kiss. He enjoyed each touch of her tender lips.

He slowly pulled away.

“Now can you take the phone?” His forehead rested against hers.

“Yeah, I think so,” she answered in a breathy voice.

“I’d better be sure.” Empowered by their perfect chemistry, he leaned in for more. Her body melted against him. He wrapped his other arm around her and pulled her close.

“Wow,” she whispered, her eyes dark and smoky.

“Haven’t you ever been kissed before?” His eyes searched hers.

Nothing like kissing a girl senseless to boost his confidence. “I think I’ll just stay here all day. The rain’s not so bad.” He caressed her damp cheek with his thumb.

“I’d like that.” She leaned her head back against the rock wall, gazing contently up into his eyes.

“The tour is overrated anyway.”

Libby leaned into him, eager for more. Everything about her brought Peter alive. His life was great; he had nothing to complain about. But this simple girl turned everything upside down. He couldn’t get enough. He wanted to sneak her onto the bus and take her with him.

They parted, breathless and aroused, secure in each other’s arms. Peter’s phone rang. His family was back.

“I should have sent them to Iowa for lunch.”

“You can’t leave me now.” She sighed, wanting to stay in Peter’s arms all day.

“I think I’ll have to kill them. With my bare hands. Except my hands are busy.” He emphasized, moving them down over her hips and back up.

“What are we going to do?” Disappointment colored her words.

They had opened a new door and complicated their lives. Neither wanted to walk away.

“We’re going to talk as often as possible and text in between.” He hoped to reassure her this was only the beginning.

“Okay, but when will I see you again?” she asked, the angst clear in her voice.

“I don’t know. We’re leaving the Midwest for a while.” Not knowing worried him too. “But that isn’t going stop us from being together. I’ll figure something out. I promise.” He meant it with every fiber of his being. They barely knew each other, but he would not let her go. The connection they shared was extraordinary.

Libby nodded, her trust in him absolute. His phone played music again.

“They can wait. I’m with them all the time. You’re special.”

He lowered his lips to hers once more, feeling neither the cold nor the rain.